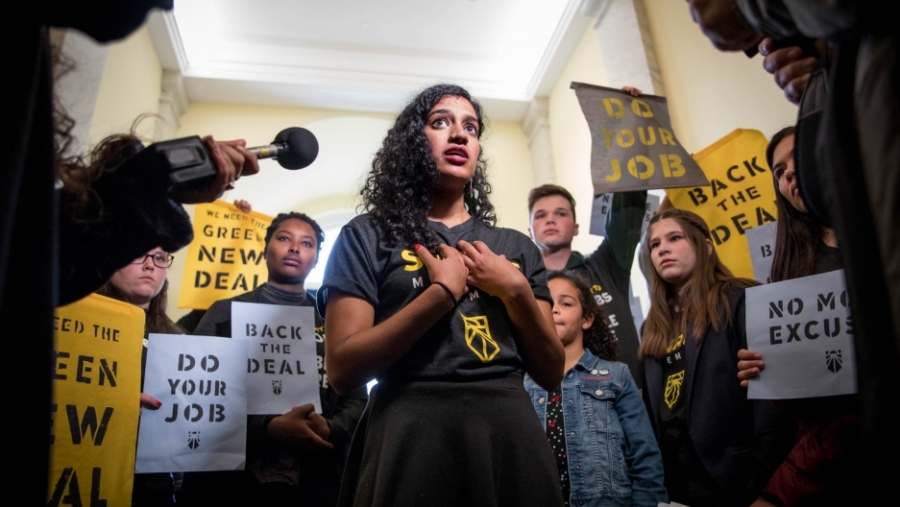 Photo Courtesy of the Sunrise Movement.

Late last week, Representative Alexandria Ocasio-Cortez (D-NY; “AOC”) finally unveiled her long-awaited Green New Deal (GND) resolution with Senator Edward Markey (D-MA), which outlines what a GND policy agenda would entail. The idea of a Green New Deal has been at the forefront of AOC’s policy agenda since she rose to prominence during the 2018 midterm election, and has quickly become a frequent talking point for progressives on the Left.

AOC’s Green New Deal proposal calls for a massive mobilization of the American economy on a scale not seen since World War II  to address climate change. The aim is to transform our energy system to run on 100% clean and renewable energy in a decade, investing heavily in our crumbling infrastructure along the way (which currently gets a grade of D+ from the American Society of Civil Engineers). All of this investment would create millions of high-paying jobs for a working class that has been struggling for decades in the face of neoliberal austerity and an increasingly global economy. AOC’s Green New Deal resolution also touches upon other vital issues, such as Medicare For All and a new foreign policy based on outsourcing our clean energy technology to other nations around the world.

Predictably, AOC’s GND resolution ignited a firestorm of bipartisan derision from pundits on both sides of the aisle.

Conservatives put their condescension hats on, generally avoiding any attacks on the policy substance of the GND resolution, and instead resorted to name calling and harping on AOC for how stupid she is. President Trump compared it to a, “highschool term paper that got a low mark,” at his recent, bombastic ‘Finish the Wall’ rally in El Paso, Texas. As AOC noted on Twitter, this was a bit ironic, as it has been widely reported that White House staff in Trump’s administration have had to shorten briefings because he won’t read anything over a page. Odds that Trump actually read the GND proposal? Very, very low, but that didn’t stop him from throwing it out there as red meat to galvanize his base.

Elsewhere amongst Republicans, there were comparisons between the GND and radical socialism in Venezuela. Ben Shapiro called it, “not even green, just full scale red.” Tucker Carlson called AOC a, “screechy moron,” and her GND resolution a, “religious document.” One Republican Senator spoke out about his concern that the GND would take away his ice cream from the floor of the Senate. Tiana Lowe wrote in the Washington Examiner that Democrats, “should be honest about their true intention: to socialize the American economy and fundamentally transform the United States into a Soviet-style hellscape.” Some conservatives decided to join CNN and partake in their own fake news, circulating fake drafts of the proposal from AOC’s website online in an attempt to defame and discredit the GND resolution.

From a ‘serious’ journalist at the Wall Street Journal.

Meanwhile, moderate Democrats focused on how ‘unrealistic’ her GND resolution was, trying to distance themselves from AOC’s GND. Nancy Pelosi (D-CA) dismissed it as a, “green dream,” before backpedaling the next day to say that she, quote, “welcomes the enthusiasm that’s there.” Rousing support from the leader of the House Democrats. Joe Manchin (D-WV), the ranking member of the Energy and Natural Resources Committee, and always reliable in his commitment to siding with Republicans, also called the GND a dream, noting that, “I gotta work with practicalities… you can’t just be a denier and say that I’m not going to use coal.”

Funny things to say about a policy that over 80% of Americans support, according to a recent poll from Business Insider. This is surely the type of bold vision and leadership that will win Democrats elections and save us from climate disaster.

Overall, the framing of the GND debate in the mainstream media fucking sucked, and felt as though it was teleported straight out of the 1990’s. Most of the GND hot takes failed to get into the substance of the plan, even though it is the only one that is fearless enough to give us a chance to prevent the worst effects of climate change. Most of the attacks essentially boiled down to ‘oh there’s no way that we can pay for that,’ even though that is definitively false.

AOC’s resolution was not meant to hold all of the answers, or to propose tangible policies that ought to be put into effect. Complex policy solutions will be needed to achieve the outlined goals of a GND, and the details of those policies are meant to be debated in open, public discourse moving forward. AOC has made this abundantly clear herself, saying that the point of the resolution was to, “define the scale of the problem, and its necessary solution, to avoid people co-opting the idea of a Green New Deal.”

Conventional political wisdom would have you think that the GND was a divisive issue, non-starter issue, but the resolution was introduced with 65 co-sponsors, with every Democratic Presidential candidate signing on. The GND was instantly injected into the national political conversation, moving the Overton window to the Left, and pushing us closer than ever to addressing climate change in a meaningful way. 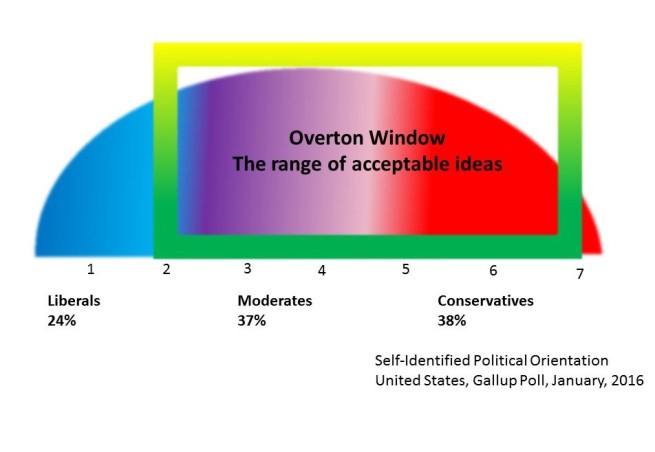 Why we need a progressive movement to move American politics back to the Left.

The type of politics on display here are much different than the typical Beltway politics that pundits in the mainstream media are used to. This is aspirational politics, driven by millennials, who are not interested in compromising on their values while so much of their future is at stake.

As millennials, we grew up with the Invasion of Iraq, Obama supposedly being a ‘socialist’, and then the election of Trump. The world is fucking burning due to decades of inaction, and scientists say we only have until 2030 to get our shit together or we’re all going to die. Civility politics, and kowtowing to Republicans, is over.

If the Obama years illustrated anything to millennials on the Left, it is that we are never going to be able to work with Republicans. They wouldn’t even accept Obama’s proposed ‘Grand Bargain’ in 2011 to cut Social Security and Medicare by $1.2 trillion because they wanted more. No longer will the Left arrive at the negotiating table with our tail between our legs, compromising our policy objectives with Republicans working in bad faith.

Weak political posturing is what got us Obamacare, a healthcare plan that is strikingly similar to that created by the Heritage Foundation, a conservative think tank. It was originally championed by Mitt Romney in Massachusetts, yet only one Republican voted for it, and Republicans still lambast it to this day. So if this is the case, why bother trying to work with them?

The smarter political strategy for achieving progressive policy goals is to start by fighting for a ‘full loaf’, so that when all is said and done, we aren’t left with crumbs (think Obamacare). Instead, a worthwhile, half loaf, will remain. This is negotiating tactics 101, and using it creates more leverage for Democrats to win tangible change on policy issues.

In the healthcare debate over Obamacare, Democrats started from a weak negotiating position in the interest of creating a ‘bipartisan consensus’ on the issue. The result was incrementalism, and a failure to make meaningful change to our immoral healthcare system. It hurt Democrats electorally in 2010 as well when they lost the Senate, in part because they had turned their backs on their base.

Republicans have used the ‘full loaf’ strategy masterfully for years, winning concessions for decades and continuing to move the needle in their favor. They went so far as to convince Bill Clinton and Democrats to cut welfare in an attempt to appeal to conservatives. By always starting from a half loaf position, the Left is guaranteed to continue ceding ground as Republicans continue to move further to the Right. 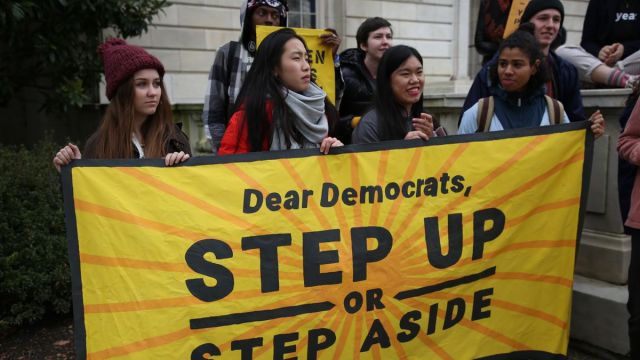 Instead of focusing on the polls, AOC and other progressives are using the bully pulpit to move the polls themselves- and succeeding. The House of Representatives recently passed a resolution that would end US support for the Saudi led genocide in Yemen, after over a year of pushing for such a measure by progressive Ro Khanna (D-CA). Last October, Bernie Sanders (I-VT) and Ro Khanna got Amazon to raise their wages to $15 hour, after creating a stir with their Stop BEZOS Act, which would have made big corporations pay for public social services (i.e. welfare, EBT) that their employees use.

Both of these measures were supported by the majority of Democrats, yet they were immediately met by hesitation and skepticism from center-Left folks in the establishment, just like the GND. These were supposedly impossible thing, yet Progressives took a stand and won ground on these important issues. The conventional wisdom of the Democratic Party does not understand how to fight With strength in the face of resistance, in no small part because they are often indebted to the same big corporate donors as the Republicans. At the end of the day, they don’t want to rock the boat, to change the status quo in a system that will continue to make them rich if they please the donors.

To win, progressive Democrats need to do the following: attack Republicans with intelligent attacks and never compromise, assert a strong, equitable vision for the future of America that champions the poor and working class, win electorally and gain majorities in Congress while also gaining the Presidency, and lastly use the bully pulpit to force the hand of any Democrats who won’t fall in line.

Jeremy Corbyn, the leader of the progressive Labor Party in the UK, calls conservatives like Theresa May his political opponents- his political enemies, however, are moderates within his own party. We need only look to the lackluster failure of Democrats to deliver in a meaningful way on Obama’s promise of ‘change’ to see that this is unfortunately true. 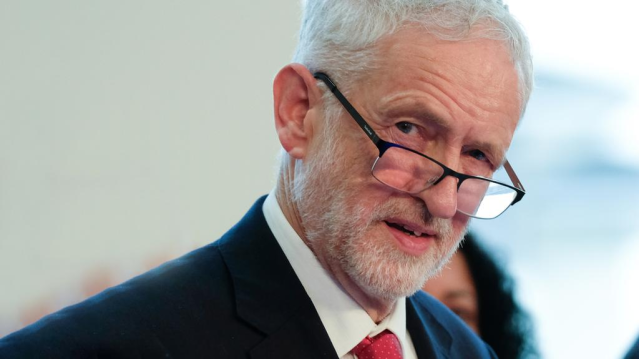 Jeremy Corbyn, leader of the Labor Party in the UK.

AOC has said that the point of the GND resolution is to define the problems that we face and the scale of the solutions that are necessary. Democratic presidential candidates will now have significantly less political wiggling room throughout the 2020 election to endorse the idea of a Green New Deal without actually meaning it. It will also be much more difficult for the concept of a Green New Deal to be co-opted by corporate Democrats, who may have tried to introduce smaller-scale ideas under the guise of them being a “Green New Deal”.

Now there is no question about what progressives mean when they talk about a Green New Deal. It sets a final destination- if you’re a Democrat, you’re either on board for the ride, or you can get off halfway as a moderate.

It isn’t a coincidence that almost every announced Democratic Presidential candidate has so far voiced their support for the GND, recognizing it correctly as a litmus test for progressive voters in their base during the 2020 election. Grassroots organizing from young, progressive groups like the Sunrise Movement have surely played a significant role in making this happen as well. As the campaigns heat up and the Democratic debates soon begin, it will be interesting to see who remains unapologetically in support of a GND- and who buckles under establishment and big money pressure.

By not backing down on the GND resolution, AOC and progressives are forcing other Democrats to take a side on the issue. This creates a public self-sorting process, where corporate Democrats can no longer hide their true colors. It looks bad for Democrats to come out against a GND. If they do, progressives can expose, shame, and pressure them on the issue, until they either cave or we primary them out of office.

Fight on AOC, fight on.